Stalk me on the Internet

I first came across Jeff Goodell’s writing in Rolling Stone, which published Why the City of Miami is Doomed to Drown in 2013. (Interestingly, the article has since been re-named Miami: How Rising Sea Levels Endanger South Florida.) I’ve referred to that article many times as a case study in the creeping reality of sea level rise, and society’s denial of the issues at hand, so I grabbed a copy of The Water Will Come as soon as I heard it existed. Plus, I get a shiver every time I say the title. It’s almost biblical. Like something out of the Book of Revelations. Messianic and mythic, but… also true.

At the same time, I’ve been reading Kim Stanley Robinson’s book New York, 2140, set in an amphibious, post-diluvian New York City. (The combo is a trip. It’s almost like they collaborated on the books. I would love to hear a conversation between them about it some time.)

But Goodell’s book begins and ends with Miami, making forays to Venice, the Netherlands, Manhattan, and Lagos in between. It reads like a kind of disaster tourism — the author seeking out people and places in various stages of realization about sea level rise, and presses them into acknowledging what it means for their city, their livelihood, their future. The responses range from denial, to complete freakout, to stoic commitment to place — going down with the ship.

END_OF_DOCUMENT_TOKEN_TO_BE_REPLACED 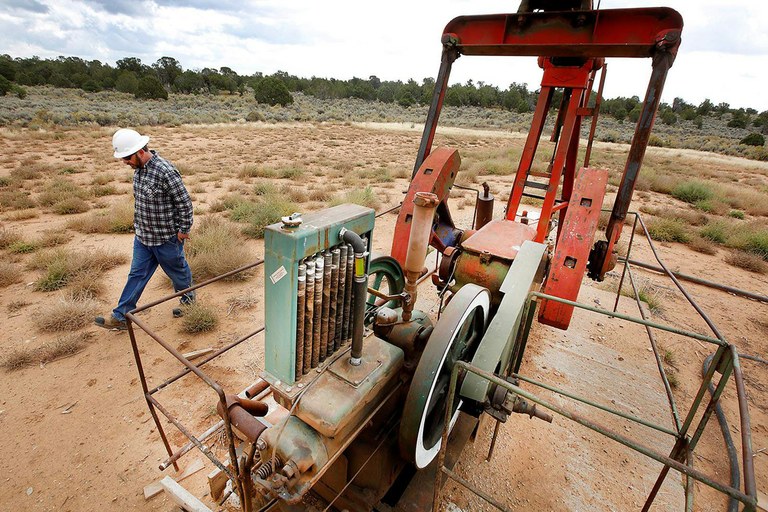 Wells left behind by industry threaten to overwhelm Western states.

Source: ‘Orphaned’ oil and gas wells are on the rise (High Country News)

A good High Country News story about the problem of orphaned methane wells in Colorado & Wyoming. Well operators “become bankrupt” and walk away, leaving the public to cover cleanup costs. In theory, operators have to put a bond up to get a permit, but the bond isn’t enough to cover cleanup costs. One operator named Atom recently forfeited a $60K bond on 50 wells, which subsequently cost the public ~$600K to clean up.  The same problem exists with reclamation bonds covering coal mines on federal land in Wyoming, except the dollar values are three orders of magnitude larger.

If the bond amounts were much larger, the money vs. time curve of a methane well or coal mine would start to look much more like that of a wind or solar installation, from capital’s point of view. Big reclamation bonds would look like part of a big up front investment, which is then followed by a long trickle of income as the mine or well produces over its lifetime.

You can slosh the costs & profits around through PPAs and other arrangements, but at a basic level, that big up front cost + long trickle of income is the fundamental cashflow time series of renewables too. Even if these different energy investments all add up to the same dollar value, the time distribution matters, because capital often just cares about net present value. (See Dave Roberts’ famous Discount Rates: A Boring Thing You Should Know About With Otters!)
From an extractor’s point of view, pushing the reclamation costs into the future makes them unimportant, because they’re discounted to the present. By the time they loom large, the true remaining value of the well or mine is already negative, with cleanup costs included. And the only rational thing to do at that point is to walk away. That’s what bankruptcy is for. But in this case, the counterparty is the public, and we have no upside risk.
The public takes on the environmental or cleanup costs of the mine or well at the outset, rather than internalizing those costs within the business decision. To put energy investments without those environmental or cleanup costs on equal footing, you’d need to give them up front or ongoing subsidies. And here we’re just talking about the traditional “environmental” costs — not the climate costs.
Half of finance and capital markets is just smuggling money through time. We can pull piles of it back from the future. Or we can exile our debts to the future. From and to those people we don’t think are us. The other half of finance seems to do the same thing with risks, extracting certainty from others, pushing uncertainty onto others, moving uncertainty through time. Trying to keep upside uncertainty, and lose downside uncertainty.
Pricing is just a little piece of what markets do.

We had some of that golden evening light tonight just after house meeting.  The kind that makes you think maybe an apocalypse is just over the horizon.  That the mountains are on fire.  That the gods are angry.  This Saturday I went for a long bike ride up to the Peak to Peak highway with Amy from Picklebric.  At the Sunshine Saddle she pointed out the cheat grass — an invasive species that she works on.  Studying disturbed ecosystems, and how to assemble new approximations of the originals from the parts at hand.  You can’t get rid of the invasives, but maybe you can influence which ones thrive.  Just beyond the divide above us, the mountains covered with red trees, a forest being transformed in a lifetime.  500 years from now will they be the Aspen mountains?  Tim applied for a job at the Nature Conservancy as a landscape ecologist in a similar vein — understanding and managing wild and semi-wild lands for their own sake.  Like the Colorado river pulse.  All this made me think of the ecopoesis that Kim Stanley Robinson portrayed in his Mars books, especially Green Mars.  Humans as gardeners of the no longer quite wild.  From here on out, it’s all gardening. Mandatory gardening.  It’s just what kind of garden do we want?  What will grow in this climate?

END_OF_DOCUMENT_TOKEN_TO_BE_REPLACED

Unfortunately, we live in a society with high discount rates and high risk tolerance.  Or at least, that’s what you’d infer from our collective behavior.  It’s also what you’d gather from a lot of the rhetoric around climate action, and our obsession with trying to make it “economically efficient”, to the point of maybe not doing it at all.  Our risk tolerances and discount rates aren’t really objectively measurable.  They are fluid, and context sensitive.  The same person in different situations will not behave consistently.  Different people in the same situation may come to different conclusions.  How we deal with uncertainty and the value of the future is a personal as well as cultural decision.

For some reason, I find myself with a low pure time preference, and an aversion to many kinds of risk.  This is part of why I find our unwillingness to act on climate infuriating, and why I’m working on climate policy.  I got to wondering, how did I end up this way?  Why isn’t it more common?

END_OF_DOCUMENT_TOKEN_TO_BE_REPLACED

In May of 2013 I gave a talk at Clean Energy Action’s Global Warming Solutions Speaker Series in Boulder, on how we might structure a carbon pricing scheme in Colorado. You can also download a PDF of the slides and watch an edited version of that presentation via YouTube:

But wait… I can hear you saying, I thought James Hansen and others  were rallying support for a revenue neutral carbon tax proposal?  Even the arch-conservative American Enterprise Institute was looking into it, weren’t they?

A carbon price alone is not enough to get the job done — there are other pieces of our energy markets that also have to be fixed to get us to carbon zero.

END_OF_DOCUMENT_TOKEN_TO_BE_REPLACED

A good seminar by Kevin Anderson (former head of the Tyndall Center for Climate Research in the UK), exploring the conflicts between our stated goal of keeping global warming under 2°C, and the actual energy and emissions policies that the developed world adopts:

The same basic information, in a peer-reviewed format Beyond “Dangerous” Climate Change: Emissions Scenarios for a New World, in the Transactions of the Royal Society.  Also in a Nature Commentary (paywall).

The basic point he’s making is, the assumptions that are currently going into climate policy discussions are unrealistic, with respect to what’s required to meet a 2°C goal, even 50% of the time.  They require global emissions peaks in 2015 and eventually negative emissions, in order to be able to accommodate the 3-4% annual emissions declines that the economists (which he likes to call astrologers) say is compatible with continued economic growth.  But a global peak in 2015 is at this point outlandish from China or India or Brazil or South Africa’s point of view.  To give them even a tiny bit of breathing room, and treat our historical emissions even somewhat equitably, the developed world has to peak roughly now, and decline at more like 10% per year for decades, and the developing world has to follow our lead shortly thereafter (maybe 2025).

None of this is compatible with exploitation of any unconventional fuels (tar sands, shale gas, etc.).  And, he argues, it also isn’t likely to be compatible with reliance on market based instruments, given that we need to implement drastically non-marginal changes to the economy.

Refining metal ores is one of those things that’s really, really hard to do without emitting a huge amount of greenhouse gasses.  The energy sources behind our material economies are not as easily substitutable with renewables, because what they often require is extreme heat, and sometimes the carbon itself (in the case of steelmaking and concrete).  Researchers at MIT are looking at a way of directly refining molten iron oxide directly into pure iron electrolytically that results in very pure iron, and virtually no emissions, and it might work for other oxide refining processes as well.

An interesting Sankey representation of global GHG emissions, from Ecofys, updated with data from… 2010.  Yowza.  Would be good if we could get much more timely reporting of this stuff.

The fossil waters underlying the Great Plains, left over from the Pleistocene, are giving out.  We done sucked ’em dry.  Any hydrologist could have told you it was in the works.  We’ll see the end of fossil ground water pumping in the 21st century, whether we like it or not.

Some lessons from public health for sustainability and climate campaigners.  Our choices are largely not our own — context and norms are far more powerful forces for behavioral change than abstract attitudes.  Most people just stick with the default settings.  We need to change the default settings.